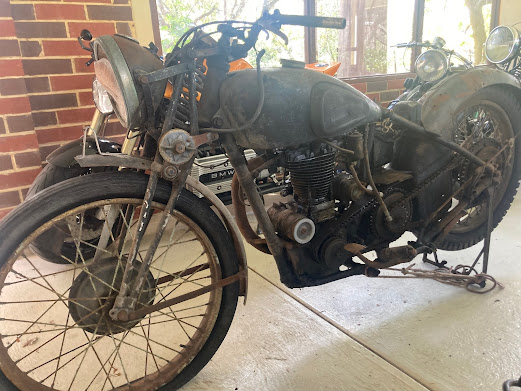 1935 Velocette Mac I have acquired a 1935 Velocette Mac, (my birth year). I am excited to be adding to my collection of English bikes (9 in total). Some would say I am addicted to restoration of what some would consider masterpieces. I plead guilty. 90% of the bike is there, albeit in a sorry sate. See photos... As always I capture the bike as is with photographs, this is for a before and after understanding but it is obviosly very helpful in re assembly
1 comment
Read more

1949 BSA 250cc I have been able to source this gem of a bike from a guy in Lismore NSW. It is all there and only requires some tender loving care to bring it back to its condition as purchased. Looking forward to the challenge.
2 comments
Read more

Photos of Scott Flying Squirel for guidance in my rebuild 1938 Scott Flying Squirrel Whenever I source a vintage bike as you have seen previously I build a record of detailed photos of the condition of the bike as required which is in valuable in assisting the the total refurbishment The photos below have been taken in no particular sequence History of Scott Flying Squirrel I thought it appropriate that a statement should be included about the origins of this bike The Squirrel name was used for Scott motorcycles since 1921 but with the death of the founder Alfred Angas Scott in 1923 the unorthodox Scott two-stroke motorcycles began to become more conventional. Development of the three-speed Scott Flying Squirrel began in 1922 as the company was in severe debt and faced receivership. Launched at the 1926 Earls Court motorcycle show, the Flying Squirrel was expensive - nearly twice the cost of a sporting four-stroke motorcycle of the time.[1] The unique water-cooled circulation used a co
1 comment
Read more
More posts